A Long, Long Time Ago…

The current company structure under the leadership of Robert Nuss dates back to early 70’s. However, the history of Nuss as a moving company in Australia begins over a 100 years ago in Sydney.

It was back in 1892 that John George Nuss first commenced a carrying business (general conveyor of goods) using a horse and cart and operating from a house and garage at Merlin Street, North Sydney. First known as J. NUSS and SON, little did he know then that this first step into the world of transportation would develop into a business that is now one of the largest privately owned removal companies in Australia.

A Classic and Historic Australian Story

How the Company evolved is a classic and historic Australian story. The first 1.5 generations were horse and cart operations with the principal business being delivery of fresh vegetables from the market gardens of the lower north shore of Sydney, via a punt across the harbour to “Market Street” in the city. Then a short trip down the hill to central railway station to “backload” people, suit cases and sea chests back across the harbour to the North shore. Business was good for John George Nuss and in 1910 his Son, John Peter Nuss, took over the carrying business and moved it to a house and garage at Military Road (Corner of Bydown Street), Neutral Bay. 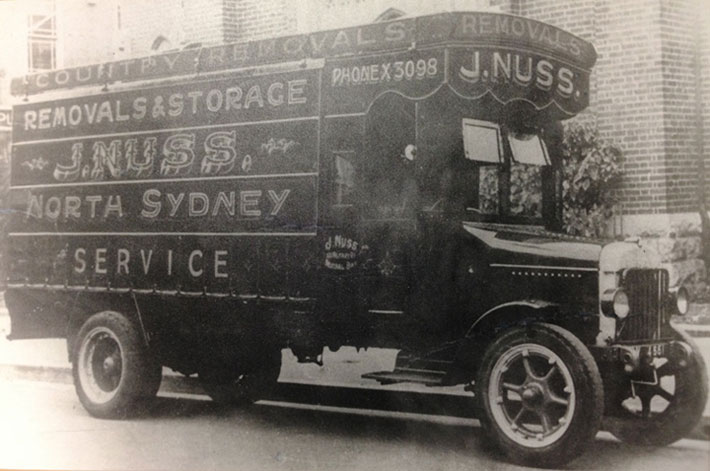 John Peter was a real entrepreneur in his day and was the first Nuss to introduce Australian removals as the principle service of the company. In 1926 he purchased the first motorised pantechnicon to appear on the streets of Sydney’s north shore, 6 years before the Sydney harbour bridge was completed. This was an International “speed” model, with the cab and chassis being imported from Chicago, U.S.A., and with the pantechnicon body being built in Australia. A genuine NUSS 1926 International Speed pantechnicon is still on the streets today, in Chatswood, and can be seen with Santa behind the wheel and handing out lollies every Christmas.

Athol Alexander (the next generation Nuss) joined the Australian Army during the Second World War, and was stationed in Darwin. He was very lucky indeed to have survived the bombardment of the city. Athol was eventually discharged and in 1945 went on to become the 3rd generation owner of the company.

In 1968 Robert John Nuss (the current 4th generation owner) took over the removal business, operating under the name of R.J. NUSS REMOVALS from his own house and garage at Roseville. Two years later her has moved the business to what had been a movie theatre in Penshurst Street, Willoughby.

In 1984 Robert purchased the current head office site at 63 Epping Road, Lane Cove. A brand new, purpose built four storey office and storage repository emerged shortly thereafter, now known as a “landmark building”. It was affectionately nicknamed “Fort Nuss” due to its commanding position on a hill above the M2 tunnel. As the company experienced substantial growth, additional land and facilities were needed and so a further 4.5 acre warehouse and office complex was purchased in Ermington, Sydney, NSW in 2004.

In 1978 Nuss Removals joined the International Federation of International Removalists and commenced providing international removal services [by sea and air] both into and out of Australia.

In 1997 Nuss opened a fully operational branch in Melbourne.

In 1998 Nuss Relocations commenced operations. This new division provides integration support services such as home finding, school search, city familiarisation and an array of other settling-in services to employees of corporate clients moving into Australia.

Nuss is the only removal company operating in Australia today which spans 4 generations and still with a Nuss at the helm.

The Nuss family ownership by generation: